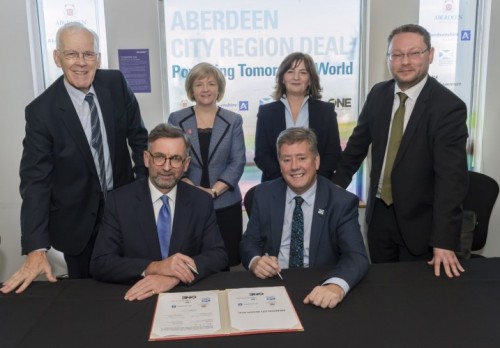 The Aberdeen City Region Deal was launched today (November 21) with the official signing of the £250million agreement.

The 10-year deal paves the way for investment in innovation, internationalisation, digital connectivity and infrastructure across the region.

It is designed to act as a catalyst for economic growth and diversification, with partners announcing that estimates suggest the Aberdeen City Region Deal’s total value could be up to £826m once private sector and other investment is factored in.

The Aberdeen City Region Deal encompasses a number of projects. It will support The Oil & Gas Technology Centre, a digital infrastructure fund and the proposed expansion of Aberdeen Harbour. A Bio-Therapeutic Hub for Innovation, Agri-Food and Nutrition Hub for Innovation and a Strategic Transport Appraisal are also part of the programme.

These projects are collectively estimated by the deal partners to be capable of delivering annual Gross Value Added (GVA) increases of £260m across the Aberdeen City Region, £222m in Scotland and £190m in the UK.

The partners also estimate the deal has the potential to create an average of 330 new jobs per year in the region, aggregating to 3,300 new net jobs over its 10-year lifespan. It could also generate additional annual tax revenues to the Government of £113m from income tax, national insurance, VAT and oil tax revenues.

“The £250m Aberdeen City Region Deal will make a huge difference to the region’s economy, helping to boost jobs and prosperity. It is great news that we are signing the deal today, meaning we can get on with driving growth in the economy of north-east Scotland.

“A key part of the deal is to support innovation and diversification in the oil and gas industry, which is why the technology centre is so crucial. I am very pleased this week that the UK and Scottish governments have been able to release the first £4m of funding, which will enable The Oil & Gas Technology Centre to begin its important work.”

“The signing of the Aberdeen City Region Deal sends an unequivocal message that the Scottish Government is committed to boosting the north-east economy, and cementing Aberdeen’s reputation as one of the world’s leading cities for business and industry.

“This multi-million pound deal will support Aberdeen’s position as a global oil and gas hub, and it’s fantastic to see the first tangible results of our investment through funding for The Oil and Gas Technology Centre which will help companies develop new products and processes that can reduce costs in the sector.

“On top of our £125m contribution to the Aberdeen City Region Deal we are also investing up to £254m to support transport, housing and digital initiatives as we recognise that supporting key infrastructure in the north-east is crucial for driving future growth in Scotland.”

“The signing of the Aberdeen City Region Deal marks the final stage in the process of bringing the deal to fruition – but also marks the beginning of a long-term programme designed to make a positive impact on our region and its economy, bringing benefits now and for generations to come.

“Aberdeen City Council is driving unprecedented transformation in our city and the projects supported by the deal will have an important part to play in our vision. We are in the midst of delivering ambitious £1billion capital programme which will improve opportunities for individuals and businesses in Aberdeen, whilst providing a solid foundation for the region as a whole.

“Innovation and diversification are at the heart of Aberdeen City Council’s plans and both of those qualities run through the City Region Deal’s themes. We are already established on the world stage but must work hard to build on that position – and the evidence of that commitment to progress can be seen throughout the city.

“Our City Centre Masterplan and Strategic Infrastructure Plan are just two examples of the way in which we are creating positive change, but we recognise Aberdeen City Council cannot act alone. We must embrace the opportunities presented by the City Region Deal and look forward to delivering projects which will ensure the maximum return for the £250m of funding it brings.”

“Today is a significant day. We have now put pen to paper on one of the biggest opportunities that this region has seen and it is hard to overstate the importance of this.

“I have confidence that it will provide opportunities for people living right across Aberdeenshire and today we can begin to unlock the money and start to see some real tangible benefits.

“In my speech this morning, I touched on infrastructure, an issue which unlocks each and every element of the deal. Providing appropriate infrastructure is fundamental to our wider success and getting the region back onto a sure footing.

“It was a pleasure to witness this moment and I look forward to moving to the next phase.”

“The City Region Deal is a strong vote of confidence from Westminster and Holyrood in the dynamism, resilience, innovation and growth potential of our key industries. The deal partners, along with the wider business community, share the Renaissance vision for our region of significant economic development in the next two or three decades to build a broad and vibrant economic base supporting high quality employment to take us past the North Sea oil era.

“Opportunity North East, which now has the support of many key local bodies and individuals, is making good progress. We have been instrumental in securing the £210m of innovation funding in the City Region Deal – which will have a transformative impact in the years ahead – and we are pursuing opportunities to attract additional private sector funding. We really appreciate the support and confidence of the business community in this agenda of Renaissance and will work with them and the wider communities to tackle this region’s long-term economic challenges.

“Today marks the transition to a new and exciting phase with the first of the innovation projects, The Oil & Gas Technology Centre, up and running with its funding in place. This signals the ambition and pace of action needed to deliver projects that will contribute to resilience and growth in our economy. Transitioning Aberdeen from a centre of operations in offshore oil and gas to a globally-recognised leader in mature basin technology via The OGTC will anchor at least some of our supply chain post the North Sea. The two innovation projects for food, drink and agriculture and life sciences will likewise significantly enhance the long term potential for these industries to make a significant contribution to our economy.”

The following provides a summary of each project:

The Oil & Gas Technology Centre is a new industry-led organisation, backed by the UK and Scottish governments, working closely with the local universities and based in Aberdeen. The centre has two goals: to help maximise economic recovery from the UK continental shelf and create a bright future for the northeast of Scotland as a global technology hub.

The Bio-Therapeutic Hub for Innovation and the Agri-Food and Nutrition Hub for Innovation will support the diversification of the region’s economy by building on our existing industries of life sciences and food, drink and agriculture. Work on the specifics of these hubs is currently under development.

The digital infrastructure fund will help address the digital challenges of the City Region and deliver affordable world class ultrafast internet services to businesses of all sizes in the region. A gap analysis has now been completed identifying the specific shortfalls in infrastructure and it is anticipated that procurement will commence in 2017 to build the necessary infrastructure. Work on a business plan for this fund is currently under development.

To support the physical infrastructure of the region there will be a strategic transport appraisal. This will take a long-term strategic view of the transport requirements looking at the City Region Deal investment across a number of transport modes including road and rail. Work on the scope of this appraisal is currently underway in collaboration with Transport Scotland.

The City Region Deal’s support for the proposed Aberdeen Harbour expansion recognises its strategic importance, not just to the energy sector but the wider diversification of the region including tourism opportunities. The funding will also develop the external supporting infrastructure to the planned expansion.